It’s been a good week. In fact, an amazing week. Of eats. Good eats, that is!

Amazing enough to make me think I might be a kitchen manic-depressive. I’d been in a months-long slump and then WHAM! suddenly I was on fire and motivated (obsessed?) again. In the space of one week I cooked out of 5 different books, tried 11 new recipes, and even canned – Whew! What a whirlwind.

What did I make/eat? (What didn’t I eat seems like it might be a shorter list)…Here are the highlights:

Chorizo Tacos – this is so brilliant that it isn’t even a recipe. Next time you see fresh chorizo sausage on sale at the butcher buy a pound or two. Take it home, break it up in a pan and brown it. Cool the meat, then freeze. If you want to be smart about it, freeze the meat by spreading it in a single layer on a baking sheet – that way when you later bag or contain the meat, you’ll be able to extract as much as you need per each meal. You’ll have little ready-to-go individually frozen sausage globules rather than one massive chunk of frozen sausage which would require thawing (or an ice pick). When ready to eat, simply shake some frozen sausage nuggets into a hot pan to reheat and serve alongside your favorite taco toppings. Dinner 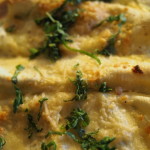 Chard Canneloni – I really loved getting to know British Chef April Bloomfield through the PBS’s Mind of a Chef (season 4 coming this Sept!) and was further pleased to read her second book, A Girl and Her Greens: Hearty Meals from the Garden. One recipe I tried (and adored) was the Swiss Chard Canneloni. You could easily sub frozen spinach for the swiss chard (and I think I will in the future or in a pinch). It is basically long pasta rolls stuffed with ricotta and greens, topped with a lemony cream sauce. Simple, satisfying, great food. The recipe calls for making your own pasta (pass). I thought about buying fresh pasta sheets from the grocer’s deli case (too stingy to do that). In the end I used 6 of the 100some Barilla no boil/oven ready lasagne noodles I have in stocked in my pantry. I briefly boiled them (2 mins?) for the same effect as fresh or homemade. 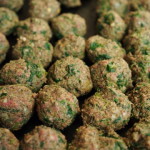 20% Meatballs – I started out making the Eggplant (meatless) Meatballs recipe in Mark Bittman’s VB6: Eat Vegan Before 6:00 to Lose Weight and Restore Your Health . . . for Good, which consist of eggplant, white beans, and bread crumbs. Never one to leave well enough alone, I added browned mushrooms, a box of frozen spinach, and a pound of ground beef to the mix. So I guess that makes them more like 16% meat meatballs, but who’s counting? 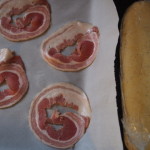 r Simple, Surprising, Hands-Off Meals Straight from the Oven. Too bad it isn’t exactly crank-the-oven weather. Still, I could eat out of this cookbook every night and be very happy. It’s cover to cover full of great recipes that are simple to execute and prepare. I had some rolled, leftover polenta from a night of sausages, polenta, and broccoli rabe so when I ran across this recipe it was an immediate go. But I’d say this easy one-pan dinner is worth making polenta for, and saving any extra to make this recipe again another night. 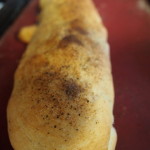 Stromboli – You know how something so obvious can escape your attention? For all the fresh dough pizza making that goes on here, somehow stromboli hadn’t entered the rotatio 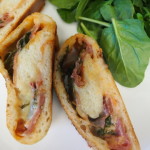 n. Well, Sheet Pan Suppers took care of that oversight! I had forgotten how good stromboli could be! Ours was stuffed with provolone, spinach, a little bit of mozzarella, prosciutto,  and some Creminelli Whiskey Salami from Whole Foods Market Bradburn.

Pulled Pork with Alabama White Sauce – I had heard a tantalizing rumor about white barbecue sauce from a friend who hails from Mississippi, and was understandably intrigued. Coincidentall 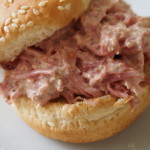 y, Bon Appetit ran a recipe for the stuff not a month later and naturally it went on the must-try list. We mixed it into a portion of Lacy’s Easiest Slow Cooker Pork. I thought it went great with pork, but hubs and I both agreed this sauce would be most divine on some slow cooked  or smoked shredded chicken, or even chicken pulled off a rotisserie bird. If you fancy yourself a BBQ fan, give this unique sauce a try. It’s undoubtedly different, and indubitably dee-lish. 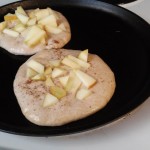 Whole Wheat Buttermilk Pancakes – Thanks to my fellow kitchen-obsessives at Cooks Illustrated for doing the legwork required to achieve the perfect 100% Whole Wheat Pancake. There’s not much to say about pancakes, being that they are so inherently wonderful. But this is a great recipe, a good one to add to my collection of pancake recipes, and tasted even better with the addition of finely diced apple bits. 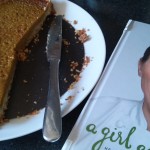 Butternut Squash Coconut Tart – This was another favorite from April Bloomfield’s A Girl and Her Greens. For the crust I used a recipe for a melted butter almost-shortbread-like crust I’d seen in Cooks Illustrated a while back. I used a box of frozen butternut squash and a can of coconut milk and somehow ended up with enough filling for 4 pies. Oops? Not really. Now I’ve got a re-purposed yogurt container full of squash coconut pie filling for anytime I feel the urge – and where I’m from, that’s called one heckuva deal!

Mandy’s Cinnamon Rolls – These are cream rolls, no yeast, no kneading, no overnight! I’d like to und 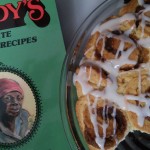 erline, bold, CAPITALIZE, and italicize that sentence cuz it feels like such a revelation to me, but I suppose not everyone might be so impressed. In non-baker-speak that all adds up to a super simple recipe for delicious anytime warm homemade cinnamon rolls (well, anytime you have cream on hand). As noted below, Mandy’s recipes lack oven temps. I baked these at 410° for 22-24 minutes, but next time I’d try 425°.

A side note about Mandy’s…first published in 1929, “Mandy” now seems like an unfortunate amalgamation and appropriation of the work of many African-American women. But given the time period, we have to be glad that Natalie Scott appreciated their work and had it recorded, documented and preserved. Lacking in precise, modern measurements and oven temperatures makes the book a bit more like a piece of American history or food anthropology. However, me being a sucker for anything and everything Sean Brock (my favorite non-Chang Mind of a Chef alum), my ears perked up when he mentioned a favorite old cookbook. It wasn’t Mandy’s Favorite Louisiana Recipes that he mentioned, but Mandy’s has been my favorite Brock-ommendation so far (here’s a great list of 10 to start with, if you’re similarly interested).

I hesitate to term this book “charming,” though to modern eyes it certainly comes across that way. Mandy’s composite charm and voice aim to record how a specific group of women at a specific time in American history worked and talked – or how their work and speech was  filtered and interpreted by a white woman (employer at best, slave master at worst). Obviously I could go on and on about this book, but here’s one rather inexplicable example that precedes the Cinnamon Rolls recipe: “de preacher ‘ll tell yo’ how a little leb’n ‘ll ‘leb’n-up de whole o’ sump’n’ – well, suh, dat’s how ’tis wid cinnamon.” “Leb’n” is…leavening? lovin’? I’m not sure, but you get the idea. Or not, in which case I invite you to immerse yourself in this voice and anthropology – 32 libraries own it, or I’d deem it well worth the $7 at a bookseller.

OK – back to the program… 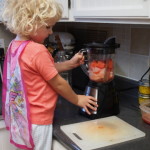 Watermelon Juice – have you ever blended roughly chopped watermelon, strained it through a sieve, and drank the results? You should. You must. Before summer is out. And the juice gets about 10x better once you let it sit in the fridge overnight. Shake, pour, and enjoy (caped semi-super assistant optional). 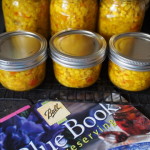 the Corn and Chile Tomato-less Salsa. It comes off a bit sweet, but I usually cut it by adding some tomatoes, black beans, and many dashes of habanero sauce. After seeing so much corn at the farmers market and watching Chef Sean Brock throw together a great meal out of things canned and fresh from the garden, I hauled the giant canning kettle out, bought a dozen ears, and put up the Canned Corn Relish recipe out of the Ball Blue Book Guide to Preserving. Well kind of – I omitted the cabbage (ewww?), added a ton more peppers than called for, and kept to the low end of their sugar recommendation. Of course the idea is that you’ll be able to enjoy the fresh summery taste of corn all winter long but….I don’t think we’re going to make it that far seeing as how we’ve already gone through 2 jars. 🙂

How about you…Feeling manic or depressive in the kitchen lately? Manics: What summer revelations and obsessions have you been cooking up? You know I’d love to hear about it – Comment below! Depressives, I feel ya – Hopefully maybe you’ll catch some of my fire and get rolling again with one of the ideas above. It feels good to be back!

3 thoughts on “This Week in Eats”