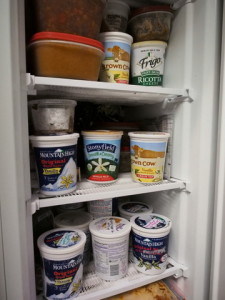 No, no – What looks like a freezer full of frozen yogurt is actually choc-a-block full of extra servings of Texas Red Chili, Gumbo Z’Herbes, and everything I’ve made in the slow cooker lately. Reusing yogurt containers is my salute to the every-day-is-Earth-Day idea, and key to how I’ve banished plastic storage bags from our grocery list, kitchen, and landfills.

We all know the 3 Rs of Recycling, right?: Reduce, Reuse, Recycle. (Tune in around 1:30 in this video to hear/see Jack Johnson’s 3 Rs song.) For us babes of the 80s, recycling was a moral imperative drilled into us at school along with Just Say No and Don’t Even Think About Smoking!

But the emphasis as I recall it was primarily on the 3rd R: Recycling. Unless I missed a week of school, we kind of glossed over reduce and reuse. But did you know the 3 Rs are listed IN ORDER OF IMPORTANCE? Yup. That’s the order you’re supposed to think about them in – FIRST, Reduce. Failing that, SECOND, Reuse. And only as a very last resort do we get to the THIRD R: Recycle.

As speculated by Jaymi Heimbuch over at TreeHugger, recycling might get all the attention because “it doesn’t require us to change the important habits, like shifting what items we buy in the first place so we avoid excessive packaging and disposable items.” Ahhhh…perceptive. We all know how hard habits are to break, right? When I think back on how many times I wrapped an unused 1/2 an onion in a plastic baggie…well, I can only groan inwardly and shake my head at former myself. Using plastic storage bags was something I had gotten in the habit of, and disposing of them was something I accepted as OK.

Glass, metal, and paper recycling is a fairly well-done process which consumes a relatively reasonable amount of energy and results in a comparable if not good-as-new product. But plastic? Oh, how I wish the same were true. Plastic recycling is fraught – requiring a staggering amount of energy and resulting in a product inferior to the original. More on the plastic recycling process as well as a video tour of a plastic bottle recycling facility can be found at TreeHugger.

Not only are plastic storage bags just landfill filler-uppers, but looking back on it I don’t even think they’re really that great at food storage! There are many things I didn’t like about using ziptop bags to store extra servings of food bound for the freezer: finding a way to fill them without the bag tipping over and spilling out the contents; figuring out how to freeze them flat; and then having a freezer full of sharp, hard, and slippery stacked hazards. Of course, the plastic would tear easily on

ce frozen and jostled around with all the other contents of the freezer as I dug around and tried not to get stabbed by one of these dinners in a bag or bludgeoned in a cascade if they all turned mutinous. I’d also forgotten how fun it was to thaw these frozen dinners out – leaving a bag of soup to thaw in the fridge all day only to find at dinnertime that half the contents are coating the interior and various recesses of said fridge because of an invisible hole or tear. Wow. Add to that my opinion that the darn things are expensive too, and it becomes pretty clear that what was meant to be a kitchen solution turned into a problem for me.

And so they’ve been banished – for the future they are banned from my grocery list, and for the now they’re gone from the kitchen. The boxes I already own have been banished to the basement pantry room for thoughtful, selective, and infrequent use. The former plastic bag drawer gets is now freed up for something more in-demand: yogurt container lids. 😉

Whether storing in plastic bags or in plastic containers,  let’s ignore the whole BPA argument for the moment. Please? Thanks. Cuz honestly I don’t know what to think about that anymore. You can find plenty of people saying 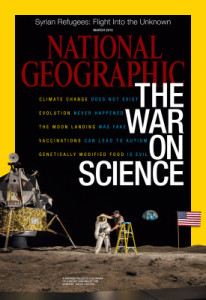 that BPA is the worst thing ever, while the FDA and others assure the public that this ubiquitous type of plastic is safe. What really is the worst thing ever is that BPA is so pervasive, AND that the substitute used in the “BPA Free!” items now for sale was actually found to be more harmful than BPA! ARG. “We face risks we can’t easily analyze” says Joel Achenback (National Geographic March 2015: Why Do Many Reasonable People Doubt Science?), and I couldn’t agree more. 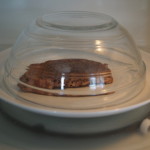 nt to contribute to The War on Science, so the plastic compromise I’ve made in our house is that we don’t heat-n-eat out of plastic anymore. I have a small collection of glass containers for reheating, or I use our regular plates and bowls with either a plate or bowl on top as a cover.

I’ve found so many uses for yogurt containers, not just freezer food storage. Around here you’ll see them as marker, crayon, bead, etc. storage, we use them as planters, for dry goods storage (for pancake mix, graham crackers, wasa, etc.), and as palettes for painting projects. I even use empty yogurt containers as mini compost bins – a nice and lidded container I keep near the trash so 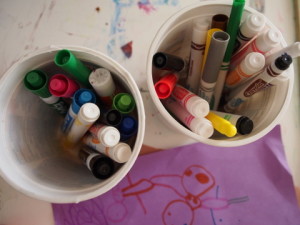 it’s easy to take out to the compost bin later.

Lest you confuse me for a paragon of Earth Day perfectionism, I’ll confess two things: I use baby wipes (a lot more than the mother of a 4 year old needs to), and I take nice long hot showers. On the one hand, I’m working on those things. On the other hand, I’ve had to cut myself some slack.

I was really getting into the waste-free thing there for a while, and putting a lot of pressure on myself about it. In the end though, as the pendulum found its way back to center we’ve adopted cloth napkins, cut an ancient towel into 8 pieces as a sometimes paper towel substitute, and stopped using plastic wrap and plastic storage bags. If I was really serious about no-impact living, you know I’d make my own yogurt every week and use glass canning jars to store it. 😉

Plastic yogurt containers are what I reuse cuz that’s what we have a steady stream and supply of around here. But look around your house and fridge – what is coming in that you could re-purpose before sending back out as waste? Remember the 3 steps – if you couldn’t find a way to reduce or refuse the packaging, think momentarily and creatively about reusing it before sending it into the recycling stream.

4 thoughts on “REUSE!: How (and why) I’ve Banished Plastic Storage Bags.”