I’ll admit, when I got my Grandmother’s collection of more than 180 recipes from her 1950s-era television show, Today’s Kitchen, I was a little daunted.  I knew I wanted to cook my way through it, but where to start?  Should I start with recipe No. 1 and just work my way through numerically?  Or should I page through and find something that looked tasty and interesting?

In the end, I compromised a bit: I picked the first recipe in the book, but it was out of order, pulled out and put at the front because it was a family favorite.  It’s also the only recipe in the book that I’m sure I’ve eaten before: baked creamed green meat enchiladas.

The title is a little unfortunate, because without the use of a comma, it could be read as containing green meat.  😉  But in fact, it is basically a recipe for layered green chile and beef enchiladas made with condensed soups for the creamy part. 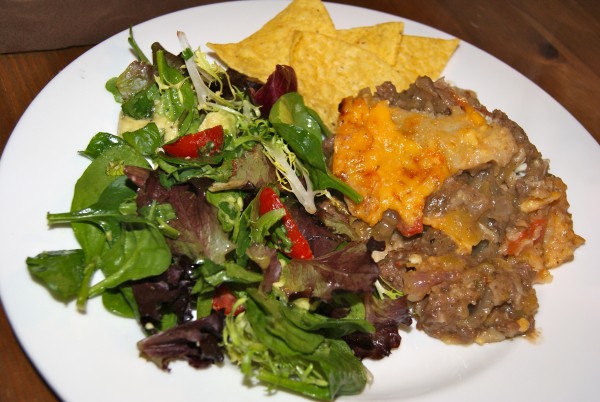 But it had so much of the charm that has drawn me to these recipes in the first place.  You can see that the page is stained and spattered from use.  I love the fact that it calls for “1 Cup sweet or sour milk”—would you ever see the term “sour milk” in a recipe nowadays?  And rather than giving an exact temperature, the recipe rather poetically calls for the casserole to be baked in a “moderate oven.”

It is also attributed to “Glendola Penn, November Prize Winner 1954.”  I called my Grandma up and she explained that they held a monthly recipe contest. The winner got her recipe on the show and got to be interviewed on TV. Ms. Glendola Penn also had her casserole immortalized on the dinner tables of my grandmother, my mother, my sister and myself.  Not too shabby, if you ask me.

You can read the original recipe for baked creamed green meat enchiladas in this scanned PDF. 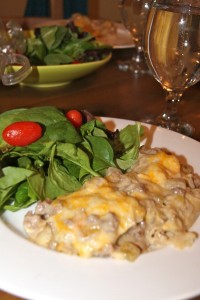 The original recipe (pictured above) was extremely soupy, calling for two cans of condensed soup to one pound of ground beef and one 4 oz can of diced green chiles.  It also called for half a pound of shredded cheese.  Strangely, the prevailing flavor was of onion—a whole medium onion diced up and sauteed with the meat—not green chile at all.

On the whole, it wasn’t terrible, but it wasn’t really our style either.  My husband complained that it was awfully bland, and that the consistency seemed more like a dip than an enchilada.  He did, however, eat two helpings at dinner and then took the leftovers to work for lunch later in the week, so it certainly wasn’t inedible.  I thought it was way too soupy and too heavy with all that cheese—even for a Tex Mex dish that is, almost by definition, going to be heavy.

So I decided that it needed an update.  My first goal was to get it less soupy and more flavorful, so I replaced one can of condensed soup with green enchilada sauce and the other with my own, homemade mushroom gravy.  Next, I wanted the cheesy flavor without quite so much cheese, so I used less than half as much cheddar, but made it extra sharp, and added half a cup of feta (because that’s what I had on hand—but you could certainly use queso fresco) for a tangy flavor without as much heft and grease.

You can easily make this recipe lighter:

I do not, however, recommend using reduced fat cheddar; just get the sharpest cheese you can find and use less. Also, don’t skimp on the fat in the gravy or the consistency will not be right.

You can also make this recipe vegetarian by substituting soy crumbles for the ground beef.

For children: This is a very kid-friendly dish; kids love to eat it like a dip with chips. Be sure to use mild green chiles and enchilada sauce if your child is sensitive to spicy foods.

We both preferred the new version over the old version.  And, to be honest, this is much more similar to the way I ate this growing up as a child—with a can of green enchilada sauce standing in for one of the cans of condensed soup.  It also stands up better, more like the layered enchiladas of New Mexico than just a glop of soup and beef.

Another bonus of this recipe is that you can easily make it lighter:

I do not, however, recommend using reduced fat cheddar; just get the sharpest cheese you can find and use less. Also, don’t skimp on the fat in the gravy or the consistency will not be right.

two stars — edible, but not great

three stars — would make this again