Did you see the news back in June? The CDC released a list of Powerhouse Fruits and Vegetables (PFVs) in an effort to get to the bottom of the whole super food phenomena. It was published in their journal Preventing Chronic Disease. (Scroll down past the article abstract et al to see the ranked list). Uhh…watercress is #1.

Watercress? Watercress. No joke. Go ahead and check, I’ll wait. And kale is…#15 (ranked below chives! below leaf and romaine lettuce! Even parsley is apparently more powerful. What the what?!). So the question is what I’m going to do with my kale necklace, and if watercress has too many letters to be made into jewelry.

Watercress – the #1 superfood, according to the CDC. What the what?

What makes a superfood super?

You may be familiar with the CDC from such films as Outbreak and World War Z. And if you’re lucky, your familiarity ends there. 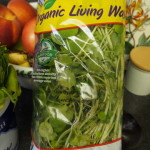 Being a scientific body, the CDC can’t let us get away with arbitrarily categorizing some foods as “SUPER!” Their list of Powerhouse Fruits and Vegetables (PFVs) is ranked and measured by nutrient density per 100 calories of each food tested (nutrients-to-calorie ratio). These foods are “most strongly associated with reduced chronic disease risk” and provide “10% or more daily value per 100 kcal of 17 qualifying nutrients”: potassium, fiber, protein, calcium, iron, thiamin, riboflavin, niacin, folate, zinc, and vitamins A, B6, B12, C, D, E, and K.

“Higher-ranking foods provide more nutrients-per-calories.” says lead researcher Dr. Di Noia. To be fair, a lot of our traditionally-held super foods weren’t included on the list because scientists couldn’t figure out a way to incorporate phytochemicals into the rubric. So they are undoubtedly super, but not yet scientifically-proven powerhouses. 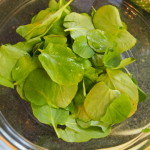 Ranking watercress as #1 irked me for many days. Mostly probably because I was ashamed that I had never really had the stuff. Wasn’t watercress just for English tea sandwiches?

Once I got over the affront to my know-it-all foodie self and to my good buddy kale, I set out to change that. However…not so simple. In the burbs watercress isn’t an incredibly obvious or well stocked item. I found upland cress at Sprouts, and watercress at Natural Grocers/Vitamin Cottage. The Whole Foods up our way didn’t carry it, nor did the mainstream grocers. Other hurdles to overcome were the price, and the taste. Yowch Dub-cress, off to a troublesome start getting to know you!

Another challenge with watercress (if you can find it) is that no one can possibly eat 100 calories of the stuff! Upland cress cost $2.50 at Sprouts – but one bag contains only 4 ounces or 40 calories of cress. To ingest 100 calories therefore you’d need 2.5 bags at a cost of $6.25. One package of watercress cost $3.79 at Natural Grocers/Vitamin Cottage, but contains just over 4 ounces. So again, you’d need 2.4 bags at a cost of $9!! Oof.

I’ve had my tea sandwiches; now what?? How to eat watercress.

Having finally found cress(es), my next obstacle was what to do with the stuff. Online recipe searching in my usual places did not turn up much, and nothing too terribly inspirational.

I first tried it raw in simple salad. And promptly wished I hadn’t. 🙁 So peppery, the taste took over and dominated every bit and bite. Boo. So strike 1 was the taste, strike 2 was the fact that once you remove the leaves from the stems you’re left with not a lot of cress for your money. So I guess that was strike 3 for me – the expense! 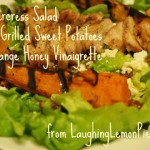 However, and in the end, I did find 2 great recipes that were not only ingestible, but also enjoyable. Click over to find recipes for Watercress Salad with Grilled Sweet Potatoes and Orange Honey Vinaigrette and Watercress 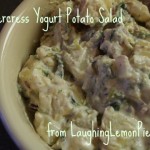 All in all though…

Despite these likeable dishes, I haven’t yet been able to get the 10 oz amount recommended to really reap watercress’ nutritional benefits (not even cumulatively, forget about daily). Perhaps the taste will grow on me? A few years ago I never ate and would have said I didn’t like kale, but that changed. Same with cherries – I used to claim to hate them. How wrong I was.

If you do find and buy cress, here’s a storage tip: Extend it’s life by storing in water. It comes bagged with roots attached, like those living lettuces. So you can cut off the bottom of the package and place the roots in a container filled with a bit of water, like you would a vase of flowers. Perhaps you could even keep it going and regrowing in water after harvesting the leaves – that would certainly be economical.

So all in all…..Too bad the super-est of the superfoods is so impractical. Maybe scientists will figure out how to factor in phytochemicals and we’ll get a more useable #1 powerhouse food in the future? Or maybe as more chefs and foodies experiment with this ingredient a mind and palate more brilliant than my own will come up with a versatile and crave-able recipe. And then of course if more people start buying cresses, availability will increase and price should decrease. So we’ll see what the future holds for this 100/100 scoring powerhouse vegetable.

Too bad the superest of super foods is super impractical…

Have you ever tried watercress? What do you think of it, and how do you use it?