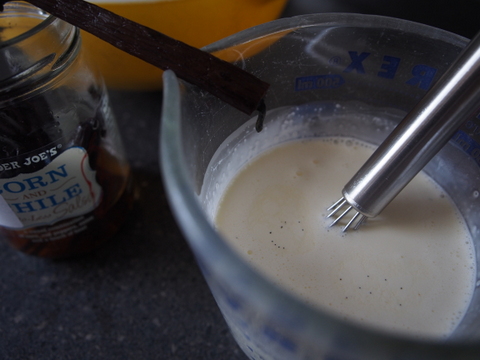 Two things converged recently that lead me into a new arena of baking trickery.

First I read a Facebook post by Good Cheap Eats about buying vanilla beans in bulk from Amazon.

Reaction #2: Duh! I buy everything else off Amazon, why not vanilla beans?

Reaction #3: How had that not occurred to me before?!

Why was I feeling guilty for buying pricey vanilla beans in twos or threes from Penzey’s or Trader Joe’s when I could afford many more by buying them vacuum-packed and in bulk online? AYE! No longer.

Nearly simultaneously I read a short tip in Cooks Illustrated (based on something they saw on CHOW via guru Sarabeth Levine) about storing halved vanilla beans in vodka or rum for two weeks then simply squoooshing out the tiny seeds from moist and pliant pods rather than trying to not cut yourself while cutting a pod in half lengthwise then scraping out the seeds. Hard to explain, but here’s the Cooks Illustrated write up and here’s the (46 second) video from CHOW illustrating the point:

On their own these two items might have been interesting-but-lost-on-me bits of info – but together! Mwooohahaha! A harmonic convergence I was open to trying out.

Unfortunately, for me the results are as of yet inconclusive.

On the one hand it is definitely worth trying, especially with low-priced beans. Unfortunately, in both the Rum Raisin and Rum Currant Scone recipes, the vanilla flavor was drowned out by the pervasive rum flavor. Not the best recipe to showcase this new technique to it’s fullest, but an intriguing notion nonetheless.

Subsequently I tried the vanilla seeds from my vodka and rum soaked beans in a soon-to-be-blogged Clementine Carrot Vanilla Cream Quick Bread (uhhh, yeah, the title is a work in progress). There, the alcohol flavor of the soaking liquid overtook the vanilla flavor, and didn’t cook out or cook off as I expected.

However, I am quite sensitive to alcohol and maybe this isn’t a problem for other bakers and other palettes.

I noticed that the beans were much more pliable and I got a lot more seeds out after about 4 weeks of soaking. There’s really no limit to how long you could soak these, the alcohol should preserve them until you’re ready to use.

I am not planning to re-dry and grind the pods as Sarabeth does in the video – Cooks Illustrated tried and concluded that it wasn’t really worthwhile. Actually, so far I’ve just been putting squooshed beans back into the soaking jar and finding that further soaking yields more seeds. I imagine I’ll do a vanilla rum sugar once I’m sure the pods are spent.

Overall, I’m not sure yet about this process and idea. I have a second order in for more vanilla beans, so I’ll keep tinkering with it and get back to you. In the meantime – let us know if you try it, have heard of the idea, do this already, or if you have any other vanilla ideas and innovations!

4 thoughts on “Innovations in Vanilla”