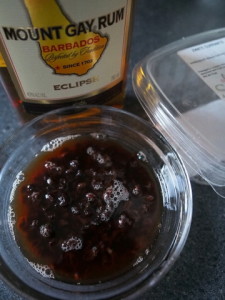 Sometimes a great idea hits and you just have to run with it. [Cue the unused bottle of rum hanging out in a cupboard and the rapidly desiccating currants and raisins in the pantry.]

To be thorough, I tried two batches – one with raisins and one with currants. For me the currants were preferable, but I’m kind of anti-raisin in general (too squishy), especially in baked goods. However, for hubs the currant version wasn’t rum-raisin-y enough and so batch #2 featured bona fide raisins bursting with rummy juice.

In both cases I soaked the tiny dried fruits overnight. The currants, being already so small and dried, didn’t absorb much rum. The raisins plumped up nicely and absorbed a lot, making a much more rummy scone. One as of yet untested idea would be to cook the fruit in the rum, to boil it for some time rather than soaking overnight. Simmering would save time and also cook off the alcohol, which some bakers/eaters might appreciate.

To my mind and palette, the Rum Currant Scones were perfectly rum flavored, and not overpoweringly so. The addition of a icing made with the remaining soaking liquid (ie raisin flavored rum!) – well, that really took it up a notch! The Rum Raisin Scones were already so rummy on their own that the rum-raisin icing was overkill.

Whether or not the alcohol baked out in the oven…I myself am not so sure. Prior to trying the raisin version I would have automatically said yes, of course it bakes off, no problem. Having tried the raisin scones myself – WHOOOO!!! I say there’s still some active rum in there. It makes for a very mellow morning, but alligator tears from the scone-spoiled 4 year old who was told that no, she couldn’t have any – these scones are for Mommies and Daddies only. Oh the heartbreak and betrayal on her tiny face!

On the other hand, I am very sensitive to alcohol and you and yours may not be as sensitive. Still and all, either way, these would be a novel addition to any brunch spread. 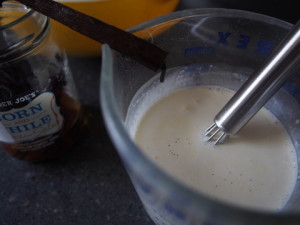 Since we’re talking about fruit soaked in alcohol, let’s talk about vanilla for a sec, m’kay?! I was inspired to explore a new frontier of baking trickery involving soaking halved vanilla beans in alcohol for 2-4 weeks in order to squooosh out the seeds rather than hoping not to cut myself while slicing dried vanilla pods and scraping out the seeds. It didn’t work out for me in this application, but soaked vanilla pods are an interesting technique in general and one I’ll be experimenting with more in the future (as outlined in Innovations in Vanilla).

What new scones or other inspiration are coming out of your kitchen these days? You know we’d love to hear about it!