It started with my impending birthday, and the desire to make a chocolate cake for myself. Simple, right? 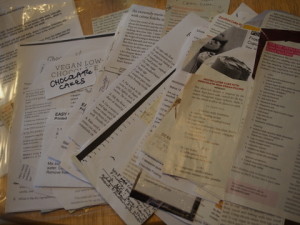 And so the quest for the best chocolate cake recipe evolved into the 2014 (1st annual?) Laughing Lemon Pie Chocolate Cake Fest — a head-to-head tasting of 8 different chocolate cakes to determine the all-time (or this time) best recipe. The most chocolately, and most worth the calories.

However, I could not do this on my own. Well, I could but it’s a lot more fun and healthy to have friends help. 20 discerning tasters were invited and advised to think CHOCOLATE.

There was no frosting to distract them – cake squares were marked with their letter in white chocolate drizzle scribble. As a (semi)blind-tasting, tasters only knew the cakes as A-H. Lacy did however make a lovely frosting used as cake “dip” for tasters so inclined. Everyone really enjoyed the stabilized buttercream recipe from Tasty Kitchen.

What’s the best #chocolate #cake #recipe EVER? Click here to find out.

Narrowing the field down to a number conceivable both to bake without a commercial oven and then limited to a number of pieces that might fit on just 2 plates per taster was excruciating! However, as I poured over my chocolate cake recipe collection I started to notice some patterns; that helped me get to 8 categories from which I then picked 1 recipe each. The categories and recipes were:

A: Guiness/Stout Chocolate Cake – My one-time all-time favorite chocolate cake was the Chocolate Stout Cake published in Bon Appetit way back in 2002. What my 2002 early 20s self thought was “The Best Cake EVER” (written in the margins of the magazine clipping), my mid-30s 2014 self balked at…4 sticks of butter?! 4?! No can do…sorry charlie. Harnessing the power of the interwebs I found a more acceptably buttered version over at Taste of Home. And for the very butter-shy, there is a “skinny” version Lacy tried and liked from Skinny Taste. 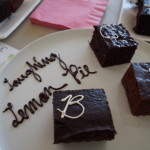 C: Box Cake Mix! – Oooh! I thought we’d throw a red herring in there to truly test the powers of industrial chemistry and food science vs those of the home baker. Some tasters were worried at my “red herring” reference…no she didn’t! no there isn’t! Omega-3 Chocolate Cake? Ha ha – no there isn’t, no I didn’t. Based on a recommendation from Food & Wine Magazine’s Taste Test: Chocolate Cake Mixes, I chose Duncan Hines. (Classic Devil’s Food. Normally $2.19 per box, on sale for $.99 each – woohoo!)

D: Buttermilk – I had to decide between two, both from Martha Stewart. These are the same recipe, except that One-Bowl Chocolate Cake adds water, and Chocolate-Coconut Sheet Cake contains coffee. I went with the coffee version.

F: Vegan – This was interesting, I had a dozen+ vegan cake recipes. When it came time to choose one I discovered…they were all the same recipe! Wow. The only variation being that some called for a cup of water. Among the choices were Martha’s Double Chocolate Cake, Nita’s Crazy Cake from Bon Ap, and Chloe Corscarelli’s Vegan Chocolate Cupcakes as published in Sunset Magazine.

G: Sour Cream – A Nigella Lawson At My Table article published in 2004 in the New York Times (I have a photocopy of a clipping of it from a reprint in the Minneapolis Star Tribune) for All-in-One Chocolate Cake. The sheer brilliance of this recipe is that you literally just dump all the ingredients in a food processor. All at the same time. Whiz it, pour it in the pan. Bake. Done. So simple! It was a must-try.

H: Mayonnaise – Cook’s Illustrated has a recipe for The Best Easy Chocolate Cake that uses mayonnaise as the sole form of fat. Normally I steer clear of mayo (it is just too too too good – the crack of foods for me. Once I have some I must. have. more. now.). But I was intrigued by the simplicity of the recipe, and heartened by the fact that there wasn’t additional fat (I draw the line at mayo + butter. Ewww.). 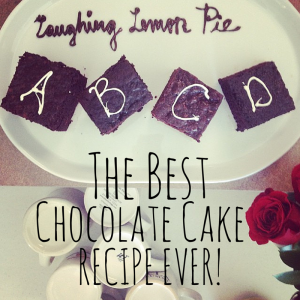 Yep, the by far and away winner and crowd favorite was the vegan cake! How do you like that?! I was pretty sure that butter was going to be a big factor in the winning recipe – but no. Very interesting.

Only one person actively disliked the vegan cake. In her and/or the cake’s defense, she is married to a vegan and in so being is a bit over the whole vegan thing. Her taste buds retaliated against that particular recipe, craving butter/eggs.

A note about the vegan cake, recipe F – it is really, really chocolatey. That’s why it won, right? It’s not for the faint of heart or a person who is on the fence in their love of cocoa. It had a dark chocolate flavor, quite strong. As one taster noted, this recipe would pair really well with the sweetness of a vanilla frosting to act as a foil and complement. It went divinely with the Tasty Kitchen frosting Lacy made (here’s a review and photos of the frosting recipe as posted by Ree Drummond – The Pioneer Woman).

The 2nd and 3rd place cakes both included coffee – further cementing the fact that chocolate and coffee are best buds for your taste buds. 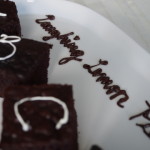 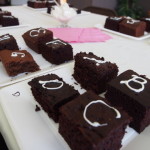 C: Duncan Hines “Classic Devil’s Food” as recommended by Food & Wine Score: 5 points (Hooray for the home-baker! I was so relieved when this wasn’t a taster-favorite. It was admittedly very good, I tried not to hate myself for liking it – Heck, it is designed by scientists for my enjoyment! It had a nearly perfect texture, but the chocolate note was mild, “weak flavor, but fluffy.”)

I’ve already got a contender for next year’s Chocolate Cake-Fest, in the healthy cakes category: 100 Calorie Chocolate Cake from Chocolate-Covered Katie. What’s your favorite chocolate cake recipe? Any suggestions for next year? Have you ever done a tasting like this? Share below!

And if you LOVED this post (and are excited to know what the best cake recipe is), please Pin and share this post with your friends! We really appreciate it!

3 thoughts on “Our Quest for the Best Chocolate Cake Recipe”