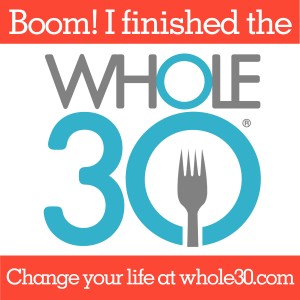 I had come across Whole30 a while back and dismissed it out of hand as being one of those crazy radical extreme diets I always swore I’d never do.

In late July, I saw a fashion blogger I follow, Wardrobe Oxygen, was doing it, and I was intrigued again.  I went to the Whole30 site and really read everything, and my fears were assuaged that it wasn’t a lose-weight-quick crazy diet, but actually more deeply about restarting a healthier relationship with food.

And then I read one line that changed everything. “This isn’t hard; losing a parent is hard.”

In early July, I lost my dad to leukemia.  It wasn’t unexpected, but it was sudden, and I was left reeling a bit.  I had just started seeing a therapist in expectation of his eventual death and the resulting grief, and rather than telling me that my previous eating disorder diagnosis was gone (as my previous, kinda crappy therapist had), she said nope! And by the way, let’s expand that diagnosis a bit.

So, I was deep in the thick of grief, yet also strongly determined not to try to eat my way out of it, as I might easily have done.

And then I read that line on the Whole30 website and thought, “You know what? They’re right.”

I decided then and there to start that weekend. I stocked my fridge.  I moved most of the non-Whole30 foods out to the garage, and I got Well Fed 2, a Whole30-approved cookbook, from the library. (The first one has a hold list on it about a mile long!!) And I got started.

And it wasn’t as hard as I had feared it would be. This from the girl who regularly starts these kinds of things and gives up part way through. I previously tried giving up sugar for a month and fell off the wagon half way through. I set myself up for the foodie diet, but when life (and family emergencies) intervened, I gave that up, too.  In fact, I can’t even count how many diets I’ve tried and given up on over the years.

This was a little different. Somehow it was easier to give up everything than just a few things or to make substitutions. There’s a fabulous post from Gretchen Rubin of The Happiness Project about being an abstainer or a moderator, and I think — despite my very deep desire to be otherwise — I’m an abstainer, meaning that, for me, it’s easier to give something up completely than to figure out how to be moderate about it.

It’s unfair to compare Whole30 to Weight Watchers (the only other program I’ve had good success with) for a lot of reasons, but for me, it was easier than Weight Watchers.

With Weight Watchers, you really can eat anything you want, as long as you religiously keep track of your portion sizes. With Whole30, you’re drastically limited in what you can eat (compared to what’s available, at any rate) yet you can eat as much of it as you want.  (To be fair, WW has a “simply filling” plan that is similar, where you can eat as much as you wish from a prescribed list of foods, but I never tried it.)

What I learned from Whole30

It taught me a lot about myself and my food choices.  I used to joke that I could never be vegan because, while I wouldn’t mind giving up meat, I would miss cheese too much. But here I am, a month in, and I’ve gone without cheese.

In the very beginning, I couldn’t get through the afternoon without a snack at 3pm. Part of it was habit, and part of it was that I was STARVING. Now, I can go much longer periods of time between meals without feeling like I have to eat.

I’m listening to the signals from my body about hunger and fullness much better. And I find that it’s much easier to STOP when I’m full.

This is not all to say that I’m not still craving carbs and sweets, because I am. Day 28, I had a long day with my daughter and was feeling really tired and out of sorts and wanted chocolate so bad I would’ve knocked over the Easter bunny himself to get it.  But I didn’t eat any.  I controlled myself.  I’m pretty sure I wouldn’t have before this.

I don’t know that I ever experienced the “magic” people talk about. I didn’t have a bunch of symptoms mysteriously vanish. I was really hoping that my keratosis pilaris and occasional cystic acne would magically disappear, but they didn’t.

I have been sleeping better and waking more easily, but I haven’t felt a burst of magical energy like some people report. I also haven’t been following a regular exercise plan (which is not a stipulation of the Whole30, although it is encouraged), so that could be part of it.

What I ate (and tried not to eat)

I wonder if the lack of “magic” is due to a few small slip-ups.  I decided none of these goofs was worth starting over, for me, but if I’d been following the Whole30 absolutely to the letter of the law, I probably should have.  For example, one time at a restaurant, I ordered my salad without cheese, but it came liberally topped with feta. The waitress was nowhere to be found, and after waiting and waiting to send it back, I picked as much of the cheese off as humanly possible and then ate the salad—but I almost certainly ate some feta.

I had some home-fried potatoes at another restaurant, which I think are a grey area, as you’re not supposed to have commercially prepared “fries.”

I ate a grilled chicken salad at Chick-fil-a with my daughter, and the chicken clearly contains some mystery ingredients, including sugar, that I wasn’t supposed to eat.

And I ate bacon from Whole Foods with “less than 2%” sugar listed on the label.

All of these are no-nos, really, but I decided to keep going.  I did NOT cheat as in having a bite of bread, finishing my daughter’s chicken nuggets, or putting sugar in my coffee, and to me, that was the more important goal.

What I did eat was a lot of meat, a lot of veggies, and a lot of fruit.  Here’s what a typical day looked like:

You can’t just leap into this without some serious consideration. It’s not for the faint of heart — or weak of bank account.

Would I do it again? I think I can safely say I would. As of this writing, I have an event to attend at a local store called Piece, Love, and Chocolate that I’m REALLY looking forward to, but after that…?

I’m hoping to continue to eat about 80% Paleo and 20% other and see where that takes me. Given what I’ve learned about myself and my problems with moderation, that may or may not be feasible.

But I’m approaching this much more as an experiment in being healthy than as a “diet” that I have to stick to. And that may make all the difference.

Have you heard of or done the Whole30? I’d love to hear about your experiences in the comments below!!

5 thoughts on “My Whole30 Results and Review”