My, oh my! It was a HOT Labor Day weekend here in Colorado, but that didn’t stop me and a bunch of other crazy people from heading downtown to Civic Center Park for the annual A Taste of Colorado festival.

I was actually invited to attend by The Better Show, which is traveling around to sample the messiest foods in the country!

In each city The Better Show is visiting America’s premier regional events—including A Taste of Colorado—and teaming up with a local chef to give away thousands of samples of the sloppiest local foods.  And I was invited to represent Laughing Lemon Pie as a local foodie and taste this awesomely messy fare.

For Denver, it was green chile-drenched breakfast burritos from family-owned Sam’s No. 3 Diner, downtown. And man, these people know how to do a breakfast burrito! I got to chow down on a two-pound MONSTER with host and comedian Chuck Nice served up by none other than owner Sam Armatas, grandson of the original Sam.

This is one serious burrito, people, packed with eggs, bacon, and potatoes and drenched in their wonderful Colorado-style “kickin'” pork green chile. DEEEEE-licious!  (That’s me sharing a bite with an associate producer, below!) 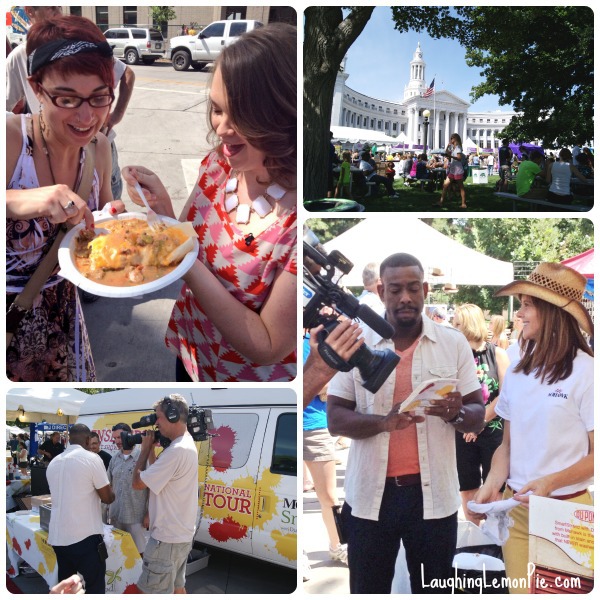 The Better Show has teamed up with Mohawk Flooring for this little jaunt around the country, calling it the “License to Spill Tour,” and they bring on the messes and hope the Mohawk people can get the stains out.

At each stop on the tour, Mohawk’s carpeting is put to the test as passersby are invited to spill their food on the “License to Spill” carpet. Here in Denver, Chuck poured on the green chile—and it came out like a dream! (That’s them working on making a mess, above!)

Sam’s No. 3 is no stranger to the limelight, either; they (and their green chile) were on an episode of Diners, Drive-Ins and Dives called “Porktastic!”

Seems like I might need to make up a batch of that “kickin'” green chile at home, soon!  Stay tuned for that, and the air date for my 15 seconds of fame on The Better Show!

3 thoughts on “Hangin’ With The Better Show at Taste of Colorado!”

Building a food forest is… a lot. A LOT. We thought we knew this going in, but there’s...