I did a cool thing today.  I fulfilled a dream I’ve had for—oh, at least five years now.  Maybe longer.

After a nice breakfast, the family and I drove out to the outlet mall and we made a beeline for the Le Cruset store.

A nice lady came up and asked if we needed any help. 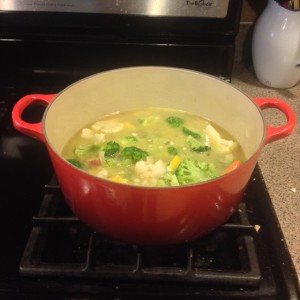 The icing on the cake is that they were having a store-wide 25% off sale! So, between the fact that it’s a seconds store (meaning, the items have slight imperfections) and the sale, I paid just a little more than half the price of a brand new, non-seconds one.

But more than getting a great deal (which you all KNOW I love) this pot was about fulfilling a promise to myself.

“Later-itis” is an insidious disease that affects lots of people—especially women, especially those of us living with budgets, and especially moms, I think.

The main symptom is that whenever you think of something you want, you immediately say to yourself, “I’ll get/do/be that later, after I…”

But here’s the catch:

The truth is, later never comes.

And about that buying nice clothes for yourself one… Why are you postponing your life until later?

Let me say that again:

Why are you postponing your life until later? (TWEET THAT!)

Well, I get that.  I mean, if you don’t have the money to go out and invest in good cookware, or nice clothes, or a massage, or whatever it is you’ve been later-izing, then that’s a pretty good reason not to do it right now, today.

But riddle me this: What action have you taken to make it a reality?

Because you could go get an empty jar and put all the change from your purse and couch cushions into it. You could look at your budget and find five dollars a week you could put towards your goal. You could spend the next half hour brainstorming ways to earn the extra money you need.

You are later-izing your life.

I don’t know about you, but I’m done waiting for later.

Part of my 2014 core desired feelings is to feel elegant, and so if there’s a purchase I need to make for that to happen, I’m going to make it a priority to figure out how to make that purchase happen.

But I also don’t want to sacrifice what I want for my future for what I want now.  (In other words: no racking up credit card debt—because debt ain’t elegant!)

To start with, I’ve put a “shopping list” page in my home journal—one for January (that I started in December) and one for February so far.  And if I think of something I want to buy, I’m going to put it on the NEXT months’ calendar, and I’m going to plan one Sunday a month as my shopping day.

If, by the time that shopping day rolls around, I still want the item and have figured out how to pay for it, I get to go buy it.

What are you later-izing in your life? What’s ONE step you could take to make it a reality? Leave me a comment below and let me know!

7 thoughts on “Stop Postponing Your Life”