OK…this post is not about food. But life, health, and Laughing Lemon Pie isn’t just about food.

Just as we make choices in our purchases at the grocery store, there are so many other home purchases we make and could think critically about. I’ve been working to reduce waste around here and reduce plastic consumption too, so it was getting harder and harder to see that huge plastic jug of liquid laundry detergent on top of my washer or in my recycle bin.

You remember the 3 Rs, right? They’re listed in order of importance: Reduce, Reuse, (then, finally, lastly) Recycle. Some people throw in a 4th R to the start of that list: Refuse. I knew I wanted to get back up the Rs – stop recycling giant laundry ju 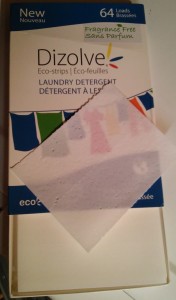 gs and reduce my household plastic intake. And only in my dreams did I imagine getting all the way to that optimum first R of refusing laundry-room plastic altogether.

You can imagine then how primed I was by the time I saw this headline on Treehugger:  Ditch the Laundry Jugs and Go Plastic-Free – I ordered Dizolve Eco Strips directly after reading the article.

Just as Lacy and Amy Ramsey counseled me through Breaking Up with Conventional Food (by buying organic), I’m here to declare that I’m breaking up with conventional laundry!

It’s part of a larger shift to break up with STUFF in general. In The Story of Stuff, Annie Leonard discusses the materials economy. It’s a long video (by modern YouTube standards) but so fundamental and worthwhile.

All our stuff – where it comes from and where it goes when we’re done with it – is the materials economy. In the video, Leonard neatly and reasonably outlines the “linear system” we’re imposing on a “finite planet.” She notes that the US represents just 5% of the world’s population, but we are “using 30% of the world’s resources and creating 30% of the world’s waste.” Furthermore, “we aren’t [truly] paying for the stuff we buy” – just like with organic vs. conventionally grown foods there is a lot more at stake than what’s reflected in the price tag at the store.

Now, I can’t speak to Tide or Target or laundry products in general in terms of The Story of Stuff. I don’t know enough to know how they all fit in there. But after watching The Story of Stuff I can never look down the aisle of Tide in the same way. Each of those jugs weighs over 10 pounds! And once I stopped to think about the process of making all those plastic jugs, filling them up with chemicals not necessarily approved by the FDA, loading them onto huge and heavy semi-trucks, and carting them around the country, then us all using them up and tossing them in the recycling bin…I was ready for a change. 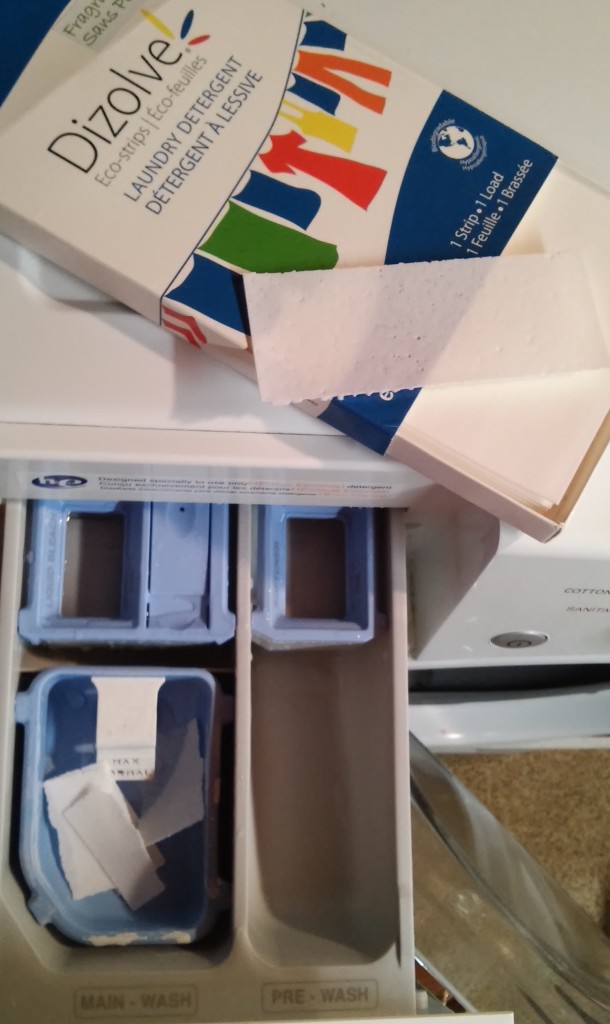 Enter Dizolve Eco-Strips – what a difference! The entire package (64 loads worth of laundry) weighs just 7 ounces! That’s just 5% of the weight per load compared with conventional plastic jug liquid laundry detergent. And it’s not just light, it’s also small – The whole package is about the size of a tablet, or a thin paperback book. The minimal packaging is made simply of easily recycled paperboard. The difference in shipping, hauling, and storing Dizolve vs conventional liquid detergent is tremendous!

Dizolve Eco-strips are laundry soap that comes in flat perforated sheets. When laundry time comes around you break off a strip and put it in the soap section of the washer – for my washer that’s the same place I was putting liquid soap, and I break the strip up into 3-4 smaller pieces to fit into the little compartment. Dizolve works in cold or hot water, and in HE washers like mine.

So Dizolve easily met and exceeded all my logistical and environmental impact hopes and dreams. But in it’s ingredients, Dizolve is also better for the environment and your body. It’s paraben-free, phosphate-free, free of added dyes and perfumes, chlorine-free, readily biodegradable, and hypoallergenic.

Dizolve is made in Canada, and not available for purchase in US stores. But ordering off their website is really easy, and if you purchase 2 boxes (128 loads worth) you get free shipping. I was so enthusiastic about the product that I considered buying a box for one of you lucky readers to win, but then I got in touch with the nice folks up there and Dizolve has agreed to sponsor a reader to try their product! Just enter the raffle below. I hope you’re as impressed as I was and can start to think about the story behind the stuff you buy too.

One thought on “Breaking Up With Conventional Laundry”

Updated January 2023 I’m a big fan of the idea of capsule wardrobes in theory… The idea that...