Are you scratching your head right now or nodding in agreement? Because here’s the thing: I have heard the argument that packaged snacks, like chips and crackers and cookies, are cheaper than buying fresh fruits and veggies.  I have heard that.

It is not true.

Now, granted, this study was done with conventionally raised produce, but if you’re employing smart shopping strategies, like those I talk about in my ebook, The Ultimate Guide to Eating Organic on a Budget, then you can still get fruits and veggies cheaper than packaged snacks. (And probably considerably cheaper than organic packaged snacks.)

Packaged snacks cost nearly twice as much as fruit and veggie snacks.

Here are some of the specifics: 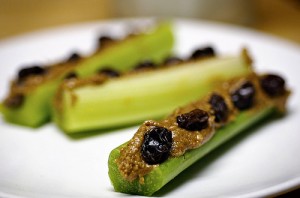 “The notion that healthy fruits and vegetables are expensive and that packaged snacks are cheaper is an urban myth that deserves to be put out to pasture once and for all,” said

Margo G. Wootan, director of nutrition policy at the Center for Science in the Public Interest. “Very few Americans are actually eating recommended amounts of fruits and vegetables—and most of us would do well to consume fewer packaged convenience foods and snacks, which are often higher in calories, salt, and sugars.”

Remember the Fruit and Veg rule

I’ve said it before, and I’ll say it again: If you do just one thing to improve your health and nutrition and that of your family, it should be eating at least one fruit or vegetable at every meal—and snack.

Now, I get that when you’re craving potato chips, a half cup of sliced cucumber is not going to cut it.  But if you ate that cucumber with the ounce potato chips, it might actually fill you up enough that you don’t eat another ounce of potato chips… and another… and another.  Get the picture?  Or pair those sliced cucumbers with a nice dip and it might satisfy just fine—and probably for STILL less money and calories than the chips (if you make the dip yourself).

Got thoughts? I’d love to hear them.  What’s your favorite fruit or veggie based snack?  If you need some ideas, check out my epic list of 84 healthy snack ideas and my more recent list of 29 low-glycemic index snacks.

2 thoughts on “Breaking News: Veggies are Better AND CHEAPER than Other Snacks”

Saturday’s food swap with Mile High Swappers was so much fun; we were hosted by Savory Spice Shop in...