Sniff sniff. Do you ever get that vacuum feeling of total emptiness when you’ve finished a great book or a great TV series/season? The Wire. Waaahhh. House of Cards. Nooooo. Homeland. Oooo, eeee, aaarrrggghhh, aaahhhhh (that’s the sound of me staggering around alternately clutching my chest and tearing out my hair, shaking my fists at the TV/universe).

If you were lucky enough to catch the Great British Baking Show on PBS (via the BBC) this winter, then you know the feeling for sure. It settles on me every Sunday evening now, and I’m kinda pretty sure life will never be the same. 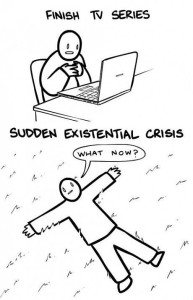 Known as the Great British Bake Off (or GBBO) on the BBC, the show has aired since 2010 in the UK and won huge popularity and awards there. In the US, PBS recently aired the show’s fifth season as the Great British Baking Show. The show itself or a recreation is shown in 15 different countries. And apparently I need to pay more attention to network TV – there was an American attempt on CBS in 2013 called The American Baking Competition.

What’s so great about this show? Ah, that is well covered territory. My favorite of which is from Buzzfeed, and therefore hard cultural evidence of the show’s awesomeness and not just the ranting of myself and other PBS-ophiles.

So, I’m fixing a hole where the rain gets in and stops my mind from wandering where it will goooooo…to scones of course – that’s where my mind generally goes. Watching all that baking has renewed my quest for the perfect scone recipe, and I’m filling the GBBS-sized hole in my life with those warm pillowy nuggets of yum. Now they know how many scones it takes to fill the…Albert Hall? Oh well, you get the idea, right? 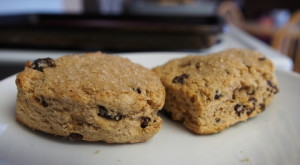 Immediately after the finale I had to try the GBBO Tea Time Scones Recipe. In my humble opinion: Meh. I’m on a cream scone run lately – cream and no butter, that is. And that one last (for now) attempt at a butter/milk scone further solidified my re-dedication to the glory of cream scones. 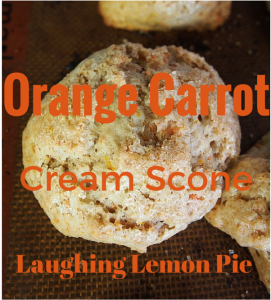 My latest/greatest recreation and appreciation of the cream scone?: The doubly orange doubly delicious and totally original Orange Carrot Cream Scone. Right, right, I know – carrots? In a scone? Well, we here at Laughing Lemon Pie are ever-searching for more ways to fit vegetables into our breakfast routine so why not? Carrots are a certified anytime-food, though scones may be relegated to just an any-morning food (at least that’s how it goes in our house). Without wading into the debate over hidden vegetables, I will say you don’t hardly taste the carrots. The orange flavor is predominant.

Give them a try yourself and let me what you think – Do they pass muster? Would Mary Berry and Paul Hollywood approve? Any tips for new TV shows are welcome too!

And in case you forgot, or haven’t heard: Luis rules!

2 thoughts on “The GBBO-Sized Hole in My Life”