Two weeks ago, I had the great pleasure of giving a talk on meal planning to my own MOPS group here in Colorado. We talked about all KINDS of stuff from picking recipes to shopping on a budget, and one question that came up was what do I buy at Costco to make the annual fee worth it.

Getting the most from a Costco membership when you shop organic

When my husband and I were first debating whether or not to purchase a Costco membership, we were very much on the fence. We were definitely on a budget, and definitely committed to buying organics—would there be enough stuff there that we would buy to make it worth it? 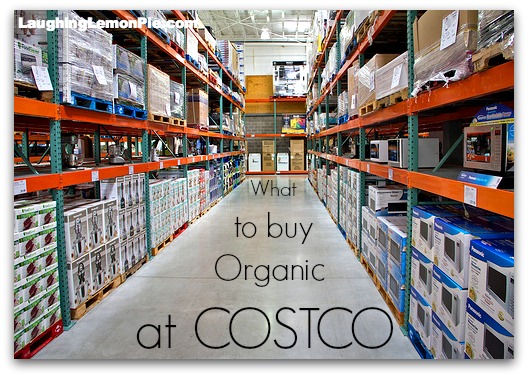 In our area, membership is $50/year. We chose Costco because it is close to our house and because I had heard that they tend to carry more organic products than Sam’s Club.

We crunched some numbers and figured a few things out:

So, right off the bat, we realized that the membership would pretty easily pay for itself for us.

But was there anything we’d actually BUY there?

*I used to regularly buy these items at Costco, but I have now found them cheaper elsewhere.

Other stuff we regularly buy there that’s not necessarily organic:

There may be other things! This was just the best list I could come up with off the top of my head (I’ll continue updating this list.)

And, the thing about Costco (and Sam’s Club) is that stuff rotates in and out all the time.  They don’t have organic cotton jammies all the time.  They may not carry New Mexico pinon coffee at your location (more the pity! It’s awesome!) But this is a general list.

I’ve found that some things—like the Kirkland brand organic butter—is consistently cheaper than anywhere else. Other things, including ground beef and bread, I’ve found cheaper other places. You shouldn’t approach a warehouse store as always having the best price, but as one more tool in your toolbox for budget organic eating.

Do you shop at Costco or Sam’s Club for organics? What do you buy? Let us know in the comments!

14 thoughts on “What to Buy Organic at Costco”

Happy Food Day! Food Day inspires Americans to change our diets and our food policies. Every October 24, thousands of events...

Do you know what’s totally glorious right now? Corn. I know, I know.  Corn is the devil food....