I’ve been following Jessica Fisher of Life as Mom and Good Cheap Eats for a while now and was really excited to see she had a new cookbook coming out: Good Cheap Eats: Everyday Dinners and Fantastic Feasts for $10 or Less. It was FishMama’s chronicles of her 2014 Pantry Challenge that lead me to question oh…only everything I own and commit to depleting my stores in an effort to (re)attain balance.

Since Fisher has been blogging so long, some of her recipes are on her websites but many are exclusive to this book including the I’m-dying-to-try Lemon Pie with Honey-Ginger Cream and Simplest Butternut Squash and Carrot Soup.

So far I’ve made the Poblano Enchiladas – the recipe pictured on the book cover. For the sauce, I used Herdez salsa verde, added some roasted 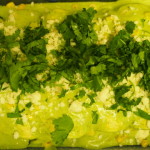 God-knows-what kind of peppers from our own garden, put in half a bag of spinach, and blended it all with an immersion blender. The result?: Let’s just say it is a good thing we don’t stock straws in our house – I would have sucked it right up/down. SO good.

Later, I made the Broccoli Slaw with Pecans and Cranberries – amazing how different mine looked!

There is no photo in the cookbook and the broccoli instructions just say “finely chopped” – so much is up to interpretation, huh? I didn’t grow up in the Broccoli Salad tradition (wish I had! Where is that region?) but have taken a guilty liking to it. I’m going to give up the guilty part since everyone at the potluck I took this to raved about it. And – if it’s good enough for Smitten Kitchen and The Kitchn, then it’s good enough for me. I was very liberal with the fresh ground black pepper, used fresh-squeezed orange juice instead of the lime juice she recommends, and threw in a handful of sunflower seeds as well. 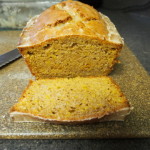 The Spiced Carrot Quick Bread was EPIC – just like Grandma used to make! It has that really nice old-fashioned spice bread flavor and excellent texture. Since I cannot seem to leave well-enough alone I used butternut squash instead of carrots, and reduced the sugar to just shy of 2 cups. I used fresh-squeezed OJ in the glaze rather than milk, plus a pinch of cinnamon. Note that the recipe on the website is for a quadruple batch – 4 loaves! The recipe in the book makes just 2 loaves. Either way you want to do the math, this bread = yum. Well worth your while (and well worth the calories). 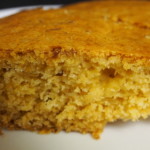 Holy Moley! This is my new favorite cornbread recipe (and that is saying a lot – cornbread is one of my more major obsessions). With a garden full of peppers I just used what we had on hand, so ours was pasilla & habanero cornbread. Crazy yum. Even better the next day for breakfast (warm and slathered with honey, of course). 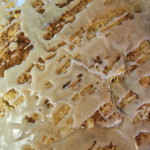 Oaty Maple Cake This was a little on the ‘meh’ side, I added some cinnamon and would consider adding a bump of ginger next time too to add some flavor. A very nice texture to the cake though. Definitely a recipe to try again. I might add currants or dried blueberries next time, just like I like in my oatmeal. 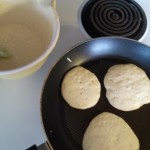 Given my cornbread obsession I am always game for a cornmeal pancake. If you keep plain yogurt stocked this is a great weekend recipe to try. My husband liked them the most of us all – maybe because his sweet tooth is so underdeveloped and these are not aggressively sweet. Such a treat to sit around the table together enjoying something yummy!

For the truly cheap among us, your local public library will have multiple copies of this book. Or it is of course availab

le from your favorite bookseller.

So – what new favorite best cookbook have you discovered and been cooking out of lately? Share share!