With Hostess shutting its doors this month, a plethora of DIY recipes for people’s favorite Hostess treats have popped up across the web (here’s a great roundup if you’re looking for your favorite).

A while back, I actually made some ho hos at home for an article for Yellow Scene magazine, along with homemade versions of Cheeze-Its and Pop Tarts.  The results were surprising to me; the copycat recipes, to my tastebuds, were more delicious than the originals, but also a lot more labor intensive.  And it was more than a little shocking to actually see the mass  quantities of eggs, butter, sugar, chocolate that went into them.

Am I discouraging you from making your own Twinkies? Not a bit!  In fact, it was a really important lesson for me in what really goes into some of my favorite processed snacks.

Click the link to read the whole article below, and then let me know: Have you made your own DIY version of your favorite processed food? How did it go?

When it comes to buying food, things have gotten a little bit complicated: local, sustainable, organic or all-natural. Food producers and marketers add labels to their products touting the health benefits and natural ingredients—whether they’re actually healthy or not. They want us to believe that Fruit Loops are a good choice for breakfast, because they contain whole grains; that Pop-Tarts are better for us because they contain zero trans fats; and that potato chips must be natural (and therefore healthy) because they only contain potatoes, oil and salt.

It’s part of a larger “greenwashing” trend reaching all corners of the marketplace whereby manufacturers are trying to take advantage of the desire for more responsible and healthy products. But what does it mean for consumers? Where do we draw the line? Is an organic toaster pastry really that much different—or better—than a regular Pop-Tart? It was a question I started to ask when I saw a recipe for homemade Pop-Tarts. Maybe that was the answer: homemade treats instead of fabricated and chemicalized food. But would it even come close to the real thing? I decided to find out.

I included three recipes in my taste test: Pop-Tarts, cheese crackers and Ho Hos. I had seen recipes for each and wanted to try them out in my own kitchen and then present them to the YS staff for a taste test alongside their commercial counterparts.

I started with the Pop-Tarts. The concept is really very simple: piecrust, cut into rectangles, filled with jam or chocolate or any number of other fillings and baked. The recipe wasn’t much more difficult than it sounds. The crust came together easily and rolled out well; the fillings I made from high-quality store-bought jam and Nutella. The hardest part of the entire process was cutting out the rectangles to be the same size for easy stacking. With a yardstick and pizza cutter at my side, I soon had my tarts. 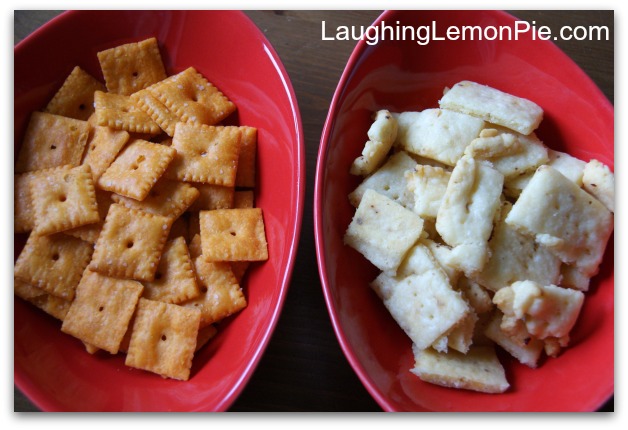 The cheese crackers were even easier. Extra-sharp shredded cheddar cheese, crushed red pepper, flour, leavening and cream all go into the food processor. A few quick whirs later, dough is easily rolled out, cut into squares (my pizza cutter was getting a workout) and popped into the oven.

The Ho Hos proved a somewhat bigger challenge. Deconstruct a Ho Ho and you’ll find a chocolate sponge cake filled with a creamy frosting and “elegantly enrobed in delectable confectionery coating,” according to the Hostess website, which obviously finds poetry in these little baked goods. My sponge cake called for seven eggs and sifting the cocoa powder with the flour three times. After the cakes were baked and the frosting whipped, it was a test of culinary skill to get them rolled together in the signature swirl. Then, the cakes were dipped into melted chocolate glaze—the closest I could come to a “delectable confectionery coating.” 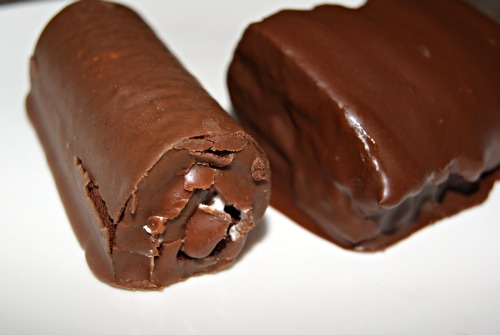 The results were somewhat astonishing. When placed next to the originals, my treats seemed awfully homemade; my mother would call it the “loving hands” look as opposed to the cookie cutter perfection of the boxed treats. The tarts were thicker and flakier, the cheese crackers a distinctly different color (not the classic neon orange of Cheese-Its) and my Ho Hos considerably larger than the ones that come wrapped in pairs.

But aesthetics are easy to overcome if flavor is there. 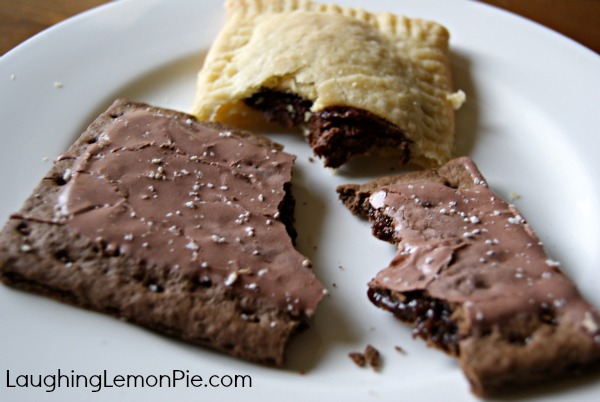 “It’s hard to even compare,” my husband said, pondering a chocolate Pop-Tart next to my Nutella filled tart. “They don’t even taste like they’re in the same family.” My tarts had a light, flaky piecrust texture with a nice saltiness that complimented the sweet. The real Pop-Tarts were much thinner and had the consistency more of a cracker (Indeed, “cracker meal” is listed in their ingredients).

The flavor of the cheese crackers was definitely stronger than the Cheese-Its we tested them against. The extra sharp cheese came through brilliantly, as did the slow heat of the crushed red pepper. The texture was considerably different; where the Cheese-Its have a strong crunch, my cheese crackers were softer, more crumbly, more the consistency of a wonderful little biscuit than a crisp cracker.

My rolled cakes were a big hit at the office. Probably because of the full stick of butter in the frosting, the cocoa in the cake, and the real dark chocolate in the glaze, they were incredibly rich and definitely tasted more like dessert than a snack. The store-bought Ho Hos seemed disappointingly bland compared to their homemade cousins.

But the reactions were not unanimous. Most of the people who participated in my little experiment vastly preferred the homemade versions over the store-bought ones, but one employee admitted he liked the taste and texture of the processed foods better. And why not? It’s what he’s used to. And as my husband put it, they almost aren’t even the same foods; the homemade versions were so different from the originals as to verge on the unrecognizable. Without being set next to their counterparts, I’m not sure my coworkers would have known what they were meant to be. Other than tasty treats, that is.

The insight I took from this experiment was not that homemade foods taste better than processed; anyone who’d ever eaten a chocolate chip cookie lovingly made by a grandma would tell you they’re no match for Chips Ahoy. The real discovery for me was the amount of time and work necessary to produce these treats. The cheese crackers were simple, and I would gladly make them again, but I certainly wouldn’t take that effort for granted when confronted with the desire to eat the entire batch in one sitting. I can’t imagine making the Pop-Tarts on a regular basis as a breakfast staple, nor spending the time to fold sifted cocoa into whipped eggs for Ho Hos to make a regular everyday snack. These recipes would absolutely fall into the special occasions category of my mental cookbook, whereas their processed counterparts can easily be grabbed at any time, for any meal. And because they are so easily available, we start to think of them as everyday foods. It’s not much of a leap to understand, then, the role processed foods have played in increasing our national waistlines.

This is not to suggest that we should give up their processed foods entirely, nor that anyone strive to make at home that secret favorite that comes individually wrapped—though, with accessibility to the Internet, the recipe probably exists. The point is merely to take a second look at those processed foods, to look past the labels, and to pay a little more attention to what we are putting in our shopping carts, and in our bellies, as though we had to whip those seven eggs ourselves.

Click here for the recipes featured in this article—and let us know if you make any ho hos at your home.