Last week, a big, heavy cardboard box showed up on my doorstep, shipped book rate, and marked with a label that said it had arrived damaged at the post office.  One look at the handwriting told me it was from my dear friend Anne.

Anne and I were in film school together in the magical city of Santa Fe about 10 years ago.  Our senior year, a series of events had us both living alone in the same apartment complex, and so just about every Friday night, we got together over a meal.  Usually it was something very simple and inexpensive.  Anne makes an amazing Frito pie—the stuff dreams are made of.  But the dinners had very little to do with our culinary prowess, and a great deal to do with the camaraderie we both needed so much.

After college, we went our separate ways. I moved to California with my boyfriend, now husband, and then to Colorado.  She went to New York City, and then on to Maine where she started her family. In the intervening years, we have seen each other only once, when she stood at my side as a bridesmaid in my wedding. But the distance and intervening years have not dulled our friendship.  Although we can go weeks or months without talking, whenever we do reconnect, it is as though no time at all has passed.  I know without a doubt that we are soul mates.

When I opened the box, I found a treasure trove of cookbooks, cooking magazines and recipes torn from magazines and copied from library books. Some are even written on notebook paper in her own hand.  I knew they were coming; she had mentioned to me that she wanted to send me some cookbooks she didn’t want to carry with her as she packed up and moved her family to a new state.

What I hadn’t expected is how moved I would be by a battered cardboard box full of recipes.  Looking through them is like seeing a portrait of my friend: Vegetarian, with many recipes torn from vegetarian magazines and copied from vegetarian cookbooks; a big fan of desserts, with a Martha Stewart Living annual recipe collection emblazoned with an intensely dark chocolate cake on the cover; searching for the perfect pancake, with recipes for nearly a dozen variations in the stack of papers; obsessed with brownies and molasses cookies; an explorer of the world, experiencing different cultures through their cuisines and spices.

These days, I keep so many of my recipes digitally.  I don’t own a recipe box, have never copied out a recipe onto a card that said “From the kitchen of…” in the corner.  Yet I feel deeply connected to these recipes on paper.  I consider the collection of recipes from my grandmother’s cooking show a family heirloom, typed by hand on her television station letterhead.  And there are certain recipes I know by heart that are branded into my memory in my mother’s hand where she had written them out for our nanny, and then for my sister and I to follow.

Maybe my darling friend meant only to lighten her load a little, but these things meant enough to her that she decided to box them up and send them off to someone who might appreciate them, rather than abandon them to a thrift store donations box—or worse, a recycling bin.

Suddenly, I feel a very strong urge to start copying out recipes for my own daughter to inherit someday.  While the Internet has opened up the possibilities of having practically every recipe ever written at our fingertips any time of the day or night, it has also removed that beautiful tradition of copying out recipes by hand, of exchanging recipes between friends in that solid, tangible way.  And, while it may seem a little sentimental, I don’t think my Pinterest boards or Evernote folders full of recipes will paint the same sort of picture of me that this box of recipes evokes of my friend.

What an amazing gift she’s given to me in a few reams of paper.

So for you, Anne, my grandmother’s recipe (in her handwriting) for molasses cookies, or Gingies, as we know them at my house.  With all my love. 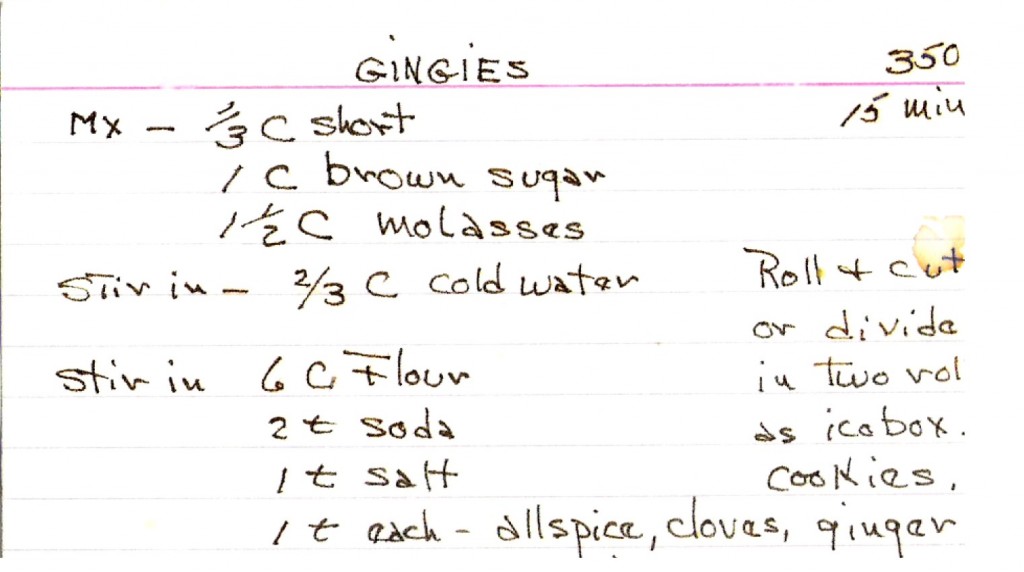 2 thoughts on “From the Kitchen of…”