Last week I was rushing around, trying to get the baby and myself out the door to run some errands. I had hauled the laptop and the baby upstairs so that I could print out a couple of coupons I had for a store I wanted to visit, and as I was trying to get the baby’s shoes on with one hand, I picked up one of the coupons with the other, saw that it had expired a week earlier, and, exasperated, said, “Well, FART NUGGETS!” really loudly.

It was one of those awesome mommy moments.

We’ve been trying to clean up our language around the little one who is absorbing everything we say at lightning speed.  I’m not sure if I’ll stick with “fart nuggets;” it held the same catharsis as a true swear word, but it might be bordering a little to close to actually being offensive for everyday use.

I mean, do I want my toddler saying “fart nuggets” to her great-grandmother or a complete stranger?  Probably not.

It is fun to say, though.  Fart nuggets.

But it occurred to me the other day during a conversation with a friend that swear words aren’t the only negative language I need to watch.  In fact, I’ve declared “fat” a four-letter word. 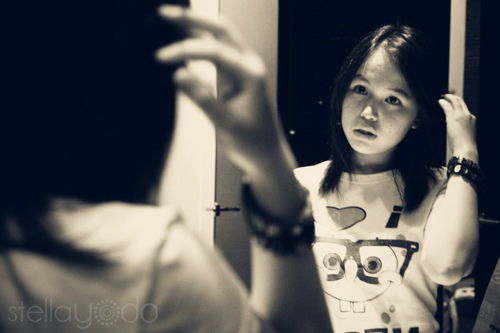 When I found out I was having a little girl, I was over the moon. But it also brought to light one of my greatest fears about becoming a mom: What if I transfer all my neuroses and issues about food and body image to my beautiful, perfect daughter?

I’ve struggled with my weight and my body image for most of my life. It’s taken me years—more than a decade—to come to some semblance of a healthy relationship with food, dieting, weight, and all the other issues that get wrapped up with them.  And one of my biggest goals in raising my daughter is to strive as much as possible to ensure that I don’t contribute to any of those issues for her.

My friend and I were talking about the moms we’ve seen in person and in the media who constantly talk about how fat they are, how much weight they have to lose, how ugly they look, and then are surprised when their daughters start thinking and talking the same way.

It’s insidious.  Most of us would never talk to our children the way we talk to ourselves, yet when we call ourselves fat, when we deride ourselves and talk trash about our bodies, guess who is listening?

So, I’m trying to clean up my language when it comes to  the way I talk about my body and food, too.

Food has no moral compass; it is neither good nor bad.  Food is just food.  It’s the way we treat it—and talk about it—that gives it such power.

I’m also trying to clean up the way I talk about others. I was horrified on my very first day with a new mom’s group to overhear two mothers talking about someone else’s daughter who had been bought her first training bra, and then to describe that child as having “fat boobies.”

I don’t want to be a part of that sort of vicious circle.  Even if the little girl in question never heard that comment, never knew she was being discussed, we heard it, and more importantly, those mothers’ very young children heard it too.  Whether they consciously absorbed it or not, they heard their mothers implying that whatever that other girl was, she wasn’t OK.

I’m not so naive as to think I can completely clean up my act.  At best, a few “fart nuggets” are going to slip through.  But hopefully I will notice when they do, and by noticing, I’ll give myself and my daughter a better chance at a normal relationship with food and our bodies.

5 thoughts on “Fat is a Four-Letter Word”