Making your own almond milk – Is it worthwhile? If saving money is the chief motivator then it’s a pretty clear cut answer: no. Even with the lowest possible price for almonds in our area (on sale for $4.99/lb at Sprouts), homemade almond milk ended up costing 250% more than the cheapest store-bought option. However, there are many other reasons one might want to DIY it. 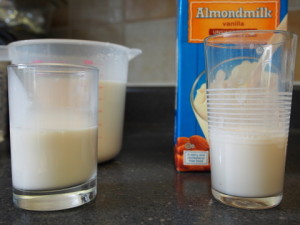 But first off – is it even a comparable product? Does homemade stand up to store-bought? In my opinion, yes. As a cold beverage the homemade almond milk was delightful and nearly identical to store-bought.

I use almond milk in coffee and tea though, and the heated up DIY version had a lot more texture than store-bought – not gritty or crunchy or thick really, but just bulky. It didn’t ruin the heated drink, but it was different than store-bought’s silky smoothness. 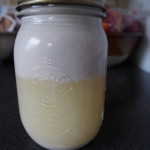 ght in the refrigerator, the DIY almond milk separated. It was easy enough to shake the jar and get it back to rights, but it does show it’s homemade-ness after a while. Of course store-bought almond milk relies on emulsifiers to keep all the particles suspended, and processing to ensure uniformity. Many people might be interested in DIY-ing almond milk to avoid the additives and emulsifiers that come with store-bought. A letter published in Nature recently suggested that commonly used emulsifiers (carrageenan, lecithin, polysorbate-80, polyglycerols, and xanthan gum, among others) make the gut more vulnerable to conditions like colitis, IBS, and metabolic syndrome. Read more about The Food Additive that Might be Making You Sick.

Another difference could be in shelf-life. I didn’t keep my DIY milk long enough to test this, but various sources suggest it has only a 4 day life in the fridge. That’s a lot different than the clearly-printed and weeks-from-now date printed on a carton of store-bought. With the price tag of homemade, you’d hate to have a batch go bad on you. Since the process is fairly simple, it is something a dedicated DIYer could and would have to do often rather than in bulk. In other words, make a few small batches throughout the week rather than one big batch once in a while.

For more data and comparison check out Simmer and Boil’s What You Need to Know About Almond Milk. It lists pros and cons, and compares almond milk to whole almonds and to regular (cow’s) milk.

Though I was first curious about the cost of DIY almond milk, seeing the article about emulsifiers got me thinking more critically about what I was buying/drinking. When I looked up almond milk in the EWG Food Scores database I found that most almond milks score around 5 (out of 10). The Environmental Working Group (EWG) ranks all manner of foods by nutrition, ingredient, and processing concerns. The EWG’s best rated almond milk is made by Pacific Foods (EWG Score: 1.6, 10 cents per ounce). 5/10 is not an alarming score, and EWG lists no outright reasons to favor DIY over store-bought, even in the 5/10 category for this product.

Once I started questioning my weekly almond milk purchase, I bumped up against the environmental impact of store-bought. It was really really bothering me to throw away those cardboard milk cartons. Some facilities recycle the containers, and others don’t – unfortunately mine falls into the “don’t/won’t” category. You can call your local recycler to see if they have that capability, as suggested by The Sierra Club’s Mr Green. And/or delve further into the question of packaging’s environmental impact over at Treehugger: Which Milk Container has the Lowest Carbon Emissions. 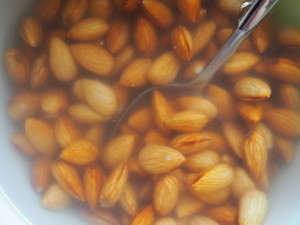 Keeping DIY almond milk in a glass jar in the fridge avoids the cost of shipping the almond milk to the store, and the cost of downcycling the container. If we take a wider angle though, the cost of growing and shipping almonds all over the country comes into question – and THAT is a pickle. Almonds have been caught up in the California drought crisis conversation (How Almonds Became a Scapegoat for California’s Drought), as covered by NPR’s The Salt (which references the original Slate and Mother Jones pieces that brought attention). It makes me more than a little sick to think I’ve contributed to this problem: “[almond milk production] has exploded in the past decade. It’s a $4.8 billion dollar market. And that’s encouraged farmers to rip out annual crops like tomatoes and melons in favor of orchards. But unlike annual crops, a farmer can’t fallow an orchard.”

Making almond milk results in lots of leftover “nutmeat.” I put it in the compost bin, but any 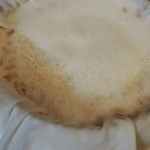 one making their own almond milk on a regular basis would have a lot of organic material to address. (I wonder what big-time almond milk manufacturers do with the stuff?) One Green Planet suggests that the remaining nutmeat could be used as almond flour (once dried) – that would be a boon and a two-fer for bakers living gluten-free and interested in making their own almond milk. The price of almond meal/flour isn’t insignificant and if you factor that into the cents per ounce of the homemade milk it might make DIY cost-effective. 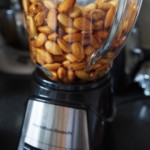 Can it be done with a very crappy blender or do you need a Vitamix? YES! I have one of the world’s worst blenders and it still made beautiful almond milk. No need for a Vitamix. I will say that while 2 cups of soaked almonds and 4 cups of water fit inside the blender, it’s too much content to blend. To get everything moving around and not overflowing I processed it in 2 batches. (This is why most recipes you’ll see call for just 1 cup almonds to 2-4 cups water.)

How many almonds does it take? 2 cups of almonds (12oz) plus 4 cups of water result in 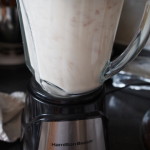 Almond Prices: If Sprouts almonds aren’t on sale (regular price $7.99/lb), then the next best price for almonds is at Costco. Costco almonds are $5.597 per pound (sold as a 3lb bag).

In Conclusion…I’m giving it up.

Given all the above, for me personally I’m going with a rogue third option. Not homemade, not store-bought, but no almond milk at all! Radical, huh? Being mindful of myself and my choices, I don’t feel like I can bear the karmic weight of either DIY or store-bought. And frankly, when I’m honest with myself – I don’t NEEEED it. I started using almond milk as a milk substitute when I noticed that cow’s milk made me very very sleepy (like nearly-passing-out sleepy). I’ve gotten in the habit of having a cup in the morning with coffee or tea, and another coffee/tea/almond milk in the afternoon for a pick me up. But really it’s just a habit. And habits can be changed.

Since I really don’t have any trouble waking up, eliminating almond milk from the morning shouldn’t be a problem. As for the p.m.? Time for me to explore better afternoon snack options like Lacy’s list of 84 Healthy Snack Ideas.

Have you made your own almond milk? What motivates you to DIY?