I spent four years (my college career) living in the beautiful city of Santa Fe, and I married a local boy so I would have a reason to go back. (I kid! Mostly…) I adore northern New Mexico for its landscape, its people and ESPECIALLY its food.

And finding good New Mexican food outside of New Mexico is like looking for Tex Mex in New York, or New York pizza in Denver… Many come close, but none quite hits the mark.

Someone who reads my column in Yellow Scene Magazine suggested I check out a new restaurant in Longmont called Antonio’s for some excellent Mexican food, and then she said the magic words: “They have another restaurant in Taos.”

Well, any restaurant that can make it in Taos is welcome in Longmont as far as I’m concerned, so I was excited to try it. The next time I was up in the area, that was all the excuse I needed to try it.

First, they make table-side guacamole. Let them doctor it up with add-ins like tomatoes, cilantro, onions and jalapeños, or go minimalist with just a touch of garlic and lime. Either way, my toddler will demonstrate the best way to eat it: 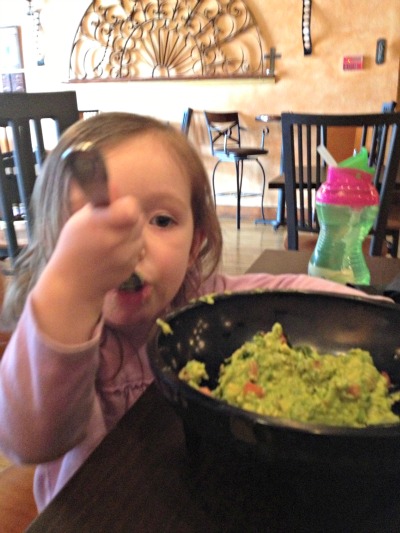 Guacamole is good, but the revelation for me was the red chile.

Here’s the thing: I’ve always been a green chile kind of girl. I had a bad first experience with red chile so bitter and hot I couldn’t eat it, and I’ve been wary of it ever since.  Even most of the really mild, canned kinds you can find taste bitter to me, but sometimes I do get a craving for classic cheese enchiladas with red chile.

I ordered the cheese enchiladas at Antonio’s and it was like a heavenly choir of red chiles burst onto my taste buds.  This, I thought, is what red chile should taste like—or, at least, it’s what I always dreamed it should taste like, with the rich complex flavors of the dried, red New Mexico chiles coming through, but without the bitterness or the overpowering heat that had driven me away in the past.

I scraped up every last drop of it from my plate.  Forget everything else.  This was the real deal.

So much so that when I hauled my husband and daughter back up there (it’s nearly an hour from our house), I ordered red chile again, this time over chiles rellenos (dipped in a light batter and fried, not wrapped in an egg roll wrapper as you often find in Colorado) with astonishingly tender carne asada on the side.  It was the evening’s special and easily big enough to feed two.

Hubby ordered a pork chimichanga with green chile, which was also authentic and not the “greasy gravy” you often get at Colorado restaurants.  The wait staff said the green chile was milder, but they were about the same for my money.

They have a full bar with a nice selection of beers and tequilas for margaritas, but don’t seem to advertise it much—we never were given a drinks menu. It gets a little noisy when full, but that makes it kid-friendly, as no one’s going to look askance when your little one squeals with delight when presented with her taco. Again, there doesn’t seem to be an actual kids’ menu, but kitchen is happy to put together a kid’s plate with a single taco, quesadilla, enchilada, etc. and rice and beans.

My verdict? You already know where you’re going to have dinner the next time you’re in Longmont. Don’t even think about it; just do it. And try the red chile. 😉

Got some free tickets to the Gluten Free & Allergy Friendly Foods Show here in Denver, and it just...

This easy paella recipe is from the book, 400 Calorie Fix by Liz Vaccariello (I believe it is out...