Somewhere during my awakening to the power of real food, I realized that the sweetened, low-fat yogurt I was eating as a regular part of my diet was a fraud.  It was masquarading as a health food, but really…

It was a dessert.  And not even a great dessert, but a low-fat dessert-like substance.

So, first, I decided to switch to plain yogurt.  I love yogurt with fresh fruit, so I thought the switch would be simple, right?

Wrong.  I did not enjoy the taste of regular plain yogurt.  It was way too tangy for me. (That’s the word people use in relation to yogurt, right?  That or tart, which I’ve never understood.) I just couldn’t do it.  I ended up adding so much honey that it sort of negated the whole point of buying plain yogurt in the first place.

Choirs of angels sang!  Light poured from Heaven! (Or possibly my refrigerator!)

To me, the taste of Greek yogurt is much milder than American-style yogurt, and I loved it.

When my daughter started eating solid foods, I wanted to introduce her to yogurt, so I started looking at “baby” yogurts—and I found that they are ALL sweetened, and mostly low-fat.  Babies under two years old should get full-fat dairy products, and so, my quest for full-fat, plain, Greek yogurt began.

And let me just tell you: it was not an easy quest. So imagine my joy when I found out that Brown Cow yogurt—a brand I already liked and trusted for their cream top-style yogurts—was releasing a Greek yogurt line! 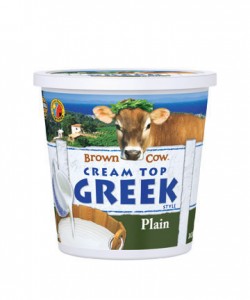 Brown Cow sent me samples of all 4 of their new, flavored Greek yogurt varieties, as well as a carton of plain, for free to review and I was thrilled to dig in and try them out.

The first flavor I dug into was maple, which I thought was fairly unique when it comes to yogurt flavors.  I liked that it wasn’t overpoweringly sweet, like some sweetened yogurts can be, and I loved the decadent feeling of digging down with your spoon and discovering the cream top layer.

Unfortunately, as I ate it, I realized that there was something amiss.  The Brown Cow yogurt wasn’t anywhere near as thick as my normal brand of Greek yogurt.  A quick glance at the ingredients explained why: the Brown Cow yogurt uses pectin to thicken it instead of draining off the whey, which is the traditional process.

Here’s an excerpt from a the America’s Test Kitchen website that explains the process:

The major difference between the [American-style and Greek-style yogurt] is that true Greek yogurt is strained to remove most of its liquid whey. The result is not only thicker than American-style yogurt, but also considerably higher in protein. In fact, it can take up to four times as much milk to make Greek yogurt using the straining process as it does to make ordinary yogurt. This high-protein product is also lower in carbohydrates and salt and usually less acidic, since much of the lactic acid (along with the carbs and salt) drains out with the whey.

But as we discovered, some manufacturers are getting at this thicker, creamier product in other ways. Rather than draining the whey with an expensive mechanical separator, they skip the straining process altogether and fortify the yogurt with thickeners like milk protein concentrate, pectin, or gelatin. Adding milk protein concentrate boosts the percentage of milk solids, buffering acidity; pectin and gelatin gel the more fluid yogurt so that it mimics the thickness of a strained product. Whichever additive is used, fortification is faster and cheaper—but not surprisingly, it produces an inferior product.

I have to say I was a little disappointed.  While all of the varieties of the Brown Cow Cream Top Greek yogurt I tasted were quite delicious, they just weren’t Greek to me.  (There’s an old joke there, I think, but I can’t quite find it.)  They tasted like a really excellent, full-fat, American-style yogurt—maybe a little thicker than regular yogurt, but nowhere near the consistency of true Greek yogurt.

All that said, I think if you like full-fat yogurt and are looking for something a little thicker than plain (or don’t have any other full-fat Greek options in your area) Brown Cow is a very good choice.

If you’d like to try it for yourself, Brown Cow is hosting sampling events at Whole Foods Market stores across the country on Saturday, August 18! They’ll be giving away free samples and coupons for $1 off.

The contest is now closed. 🙂

Brown Cow sent me yogurt to taste-test in exchange for a review, but all opinions are my own, and I was not compensated in any other way for this post.

Happy Food Day! Food Day inspires Americans to change our diets and our food policies. Every October 24, thousands of events...

Yes, you read that right! Your Laughing Lemon Ladies will be live and in-store, cooking locally grown and...